Gudangcara.com - The videos in the 4K resolution are becoming more and more popular for its unparalleled visual experience. However, every coin has two sides and 4K videos also have some problems such as video format incompatibility and bulky file size. The latter problem becomes even more obvious when you are short of the storage spaces, such as on mobile devices (iPhone/iPad/Android), computer and Cloud.

A good solution is to reduce the size of 4k videos by means of video compression. Software claiming to have the ability to process 4K videos often lead to compromised video quality inevitably. And others run very slow during video processing. Several hours are needed to compress a single movie.

That’s the reason why MacX Video Converter Pro exists. This all-in-one video converter, compressor, downloader, editor and recorder is well-known for its ability to deal with large 4K videos. It enables users to reduces video file size in three ways: 1. Convert UHD, HD videos to SD videos or other video formats with smaller file size like MP4.  2. Adjust video parameters such as bit rate, frame rate.  3. Convert video codec to HEVC/H.265, which not only shrinks the file size but also more compatible with iOS 11 and macOS High Sierra. 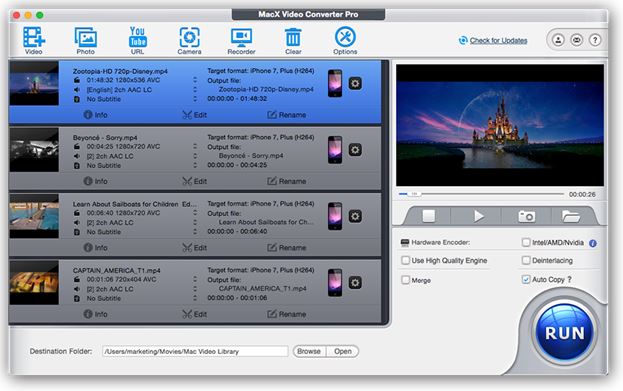 And for those people seeking for efficiency and clear video quality, MacX Video Converter Pro is the tool to satisfy all the needs. Thanks to the Level-three Hardware Acceleration tech it applies, MacX Video Converter runs 5X faster than any other competitors during every step such as video decoding, video processing, and video encoding. What’s more, the Auto Copy tech ensures the reservation of original video quality after being processed by MacX.

As mentioned above, MacX Video Converter Pro is a versatile video processing tool. Just as its name indicates, this tool can convert 4K, HD, SD videos between 200+ video formats for playback on Mac, iPhone, iPad, Android and another 400+ devices and upload to YouTube, Facebook, etc for sharing. What’s more, other bonus features in the software includes a built-in video downloader which can save videos from 300+ sites, a video editor, and a video recorder.

Take a 1-Minute Survey to Win GoPro and More!

Enjoy shooting videos? Now you get a marvelous chance to win GoPro and more prizes by taking a 1-minute survey about video-shooting held by MacXDVD company! The contest will be valid until May. 31. Why not take your chance?